Why involving young people in research is important and how it changed the PERFORM study.

A look at PERFORM researchers and their work with The Young Person’s Advisory Group North England.

Image by Rudy and Peter Skitterians from Pixabay.

The core outcome for the PERFORM study focusses on improving the diagnosis and treatment of febrile children. PERFORM researchers, Dr Emma Lim and Prof Marieke Emonts with their team, involved young people early on in the project by joining forces with The Young Person’s Advisory Group North England (YPAGne) – 1 of 15 YPAG groups across the UK who support the design and delivery of paediatric research in the UK. We talk to Dr Emma Lim and members of the YPAGne community about the unexpected turns they and the young people experienced and the positive impacts that have led Emma and Marieke and the team to continue to work with YPAGne for PERFORM’s sister EU-funded project, DIAMONDS.

Since PERFORM’s inception, young people have been involved in the design of consent forms and patient information sheets needed for all clinical studies. Ensuring participants and their families understand what they are consenting to when asked to join a clinical study is crucial, especially when that research involves children. Dr Emma Lim who is a Consultant in Paediatric Infectious Diseases/General Paediatrics at the Great North Children’s Hospital, Newcastle upon Tyne, UK, lead the focus groups with 15-19-year olds who were asked to evaluate PERFORM’s consent process for obtaining child blood samples. These would be used for PERFORM’s trials which needed a library of samples to map viral and bacterial genomes. What ensued were discussions that lead to some surprising realisations about the deferred consent model. 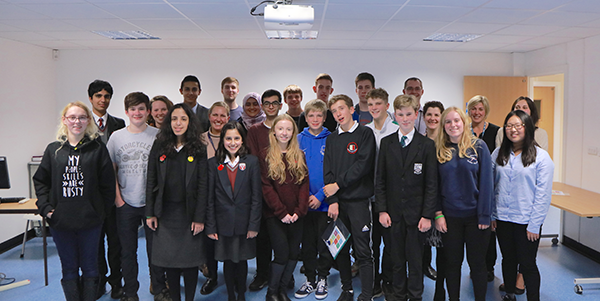 While YPAGne members said it was fine to take blood for research even though they understood that there was no benefit to them, members had some reservations about the deferred opt-out consent model. Emma explains “originally we had planned to use an opt-out model where all patients had blood samples taken and then were asked afterwards whether they agreed to the samples being used”. The YPAGne group felt an opt-out approach diminished the concept of informed consent and that it is was a missed opportunity for better patient understanding and education about clinical research. Emma comments that these discussions “actually changed the way that we planned the study…We didn't use opt-out consent because of their objections. We swapped to a targeted opt-in approach combined with a lot of education with posters all round our department explaining the role of clinical research and consent…”. 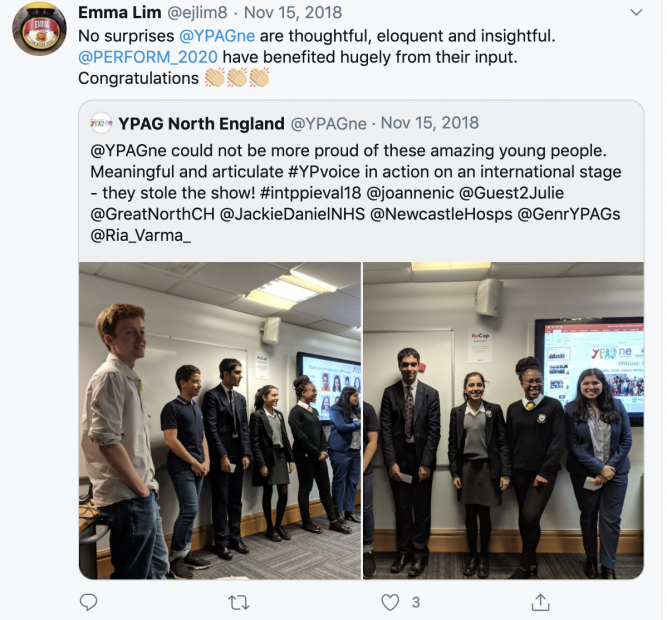 The #YPVoice across social media celebrates and raises public awareness of their impact on research.

Emma and her team spent a lot of time with the members reviewing the consent process which ultimately influenced the design of the PERFORM consent forms. The forms were reviewed overall three times by the YPAG members which was invaluable; “they criticised and rewrote it again…and found things we had overlooked or had never considered”, Emma notes. The PERFORM study received National Ethics Committee approval based on this work with YPAGne. Additionally, Emma recalls the time a member noticed a section on collecting anonymised data that was not initially discussed with them, “you just asked us about blood tests. You haven't asked…what we think about the use of collected anonymised data”. As a result, PERFORM patient public involvement (PPI) was driven by young people and their interests and the team completed another piece of work with YPAGne about the use of anonymised data in research.

What we learn from those involved is that misconceptions were challenged, assumptions were waylaid, and new and creative ideas were born that ultimately improved PERFORM’s research outcomes and engendered youth empowerment. Such positive impacts are being realised again with YPAGne now also in developing consent forms for PERFORM’s sister, newly EU-funded project, DIAMONDS. 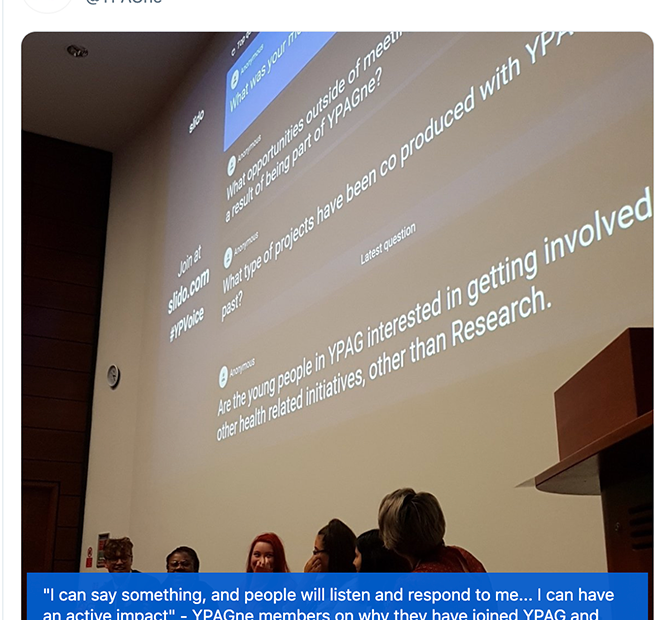 Empowering young voices and their important impact on research go hand in hand.

YPAGne members improved the delivery of a research project through their lived experiences and unique perspectives and it became clear that the YPAGne members were participating in a meaningful process, not just a ‘tick-a-box’ exercise which was the initial assumption. For Nikhita Varma, it meant furthering her professional skills and being part of great experiences. Nikhita presented at the International Perspectives on Evaluation of PPI in Research Conference, 2018 and The Great North Children’s Research Community Conference, 2019. 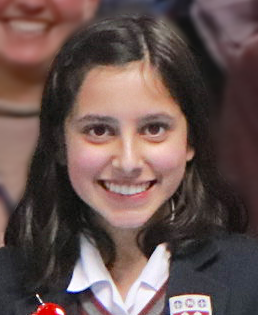 “I have thoroughly enjoyed being involved in the PERFORM study as I not only learnt about the significance of consent and assent in a clinical setting but also had an opportunity to share my opinion on matters relating to young people. In this study I actively contributed in formulating the patient information sheet and consent forms.

Through my involvement in YPAGne I got an opportunity to present the PERFORM study at the International PPI conference 2018. This immensely helped me to develop my communication skills and enhanced my confidence in public speaking. My involvement in the PERFORM study has vastly expanded my knowledge on the ethics of consent and stimulated my interest in future research in the field of medicine.”

For the members, collaborating on PERFORM meant meaningful engagement that genuinely implemented young people’s ideas and activated their voice. So it was no surprise that PERFORM was voted top project in the YPAGne annual conference 2016.  It gave YPAGne members opportunities to present their work in conferences including Holly (below) at the ethics forum of the Royal College of Paediatrics and Child Health annual conference 2018. It led members to consider a biomedical research pathway and medicine after high school. For PERFORM, the impacts were clear; a more robust consent form that ensured detailed understanding from participants and their families while concurrently opening up understanding about what was ‘missed’ information not explained for example, collecting anonymised data. 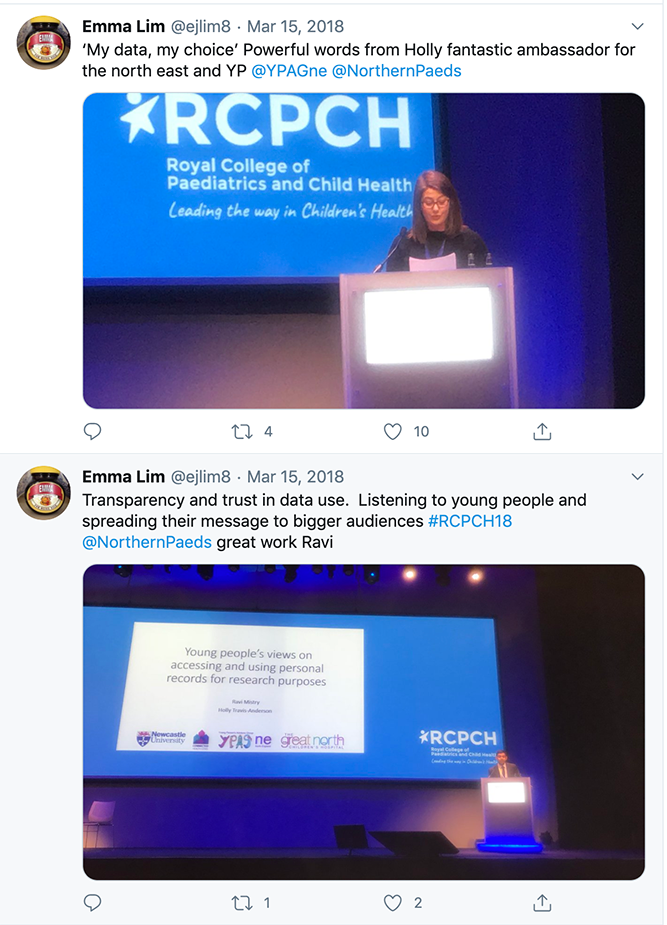 YPAG members had the opportunity to speak at the prestigious Royal College of Paediatrics and Child Health (RCPCH) conference, 2018.

YPAGne (opens in a new tab) is run by Dr Neil Davidson and Joanne Ball. Neil is a general paediatric consultant at Great North Children’s Hospital (GNCH) and he developed YPAGne with the direct involvement of young people since the beginning. Joanne has a background in secondary education and research​ and is the GNCH YPAGne and Engagement Co-ordinator. 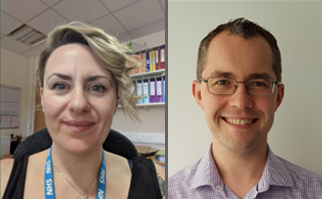 In speaking with Jo, YPAGne is “supported by a fantastic group of volunteers from various backgrounds. The aim of the group is to increase the input and influence of young people in the development of clinical and public health research…More recently we are using co-production techniques to empower young people in research and Quality Improvement with 3 projects commenced to date. “ 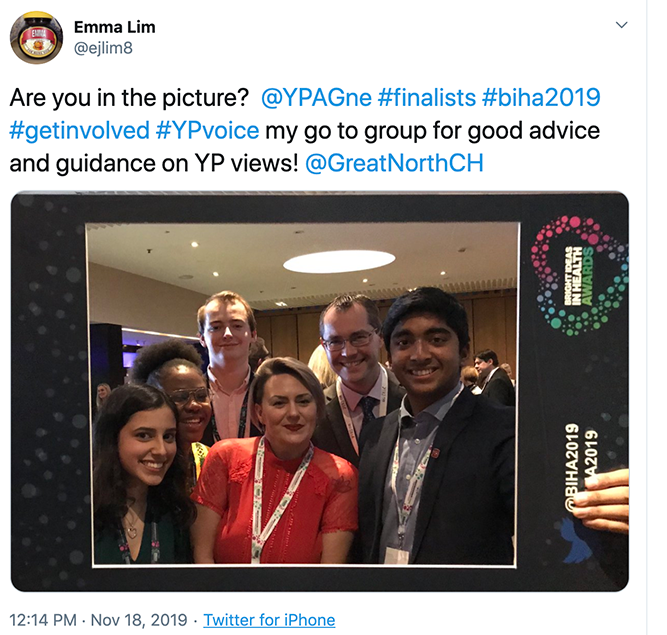 The proud team, finalists and having fun at the Bright Ideas In Health Awards 2019.

YPAGne involves roughly 50 young persons of the community aged between 13-18 who meet monthly at the Great North Children's Hospital (GNCH) in Newcastle upon Tyne. Established in 2015, YPAGne have now reviewed 93 research studies over 44 meetings. Their #YPVoice (opens in a new tab) has also been lent to advise healthcare professionals on their quality improvement (QI) projects (39 reviewed to date) and have influenced the triage process in paediatric A&E in the region, the design of the waiting area at the Children's and Young Person's Unit at the GNCH and many other projects. YPAGne members have presented at national and international conferences about their work and are active proponents of the voice of young people on social media platforms such as Twitter (follow @YPAGne) (opens in a new tab).